Before recently taking on my current two contracts, I flirted briefly with a position as an employee. In the end, I decided not to take the job on the grounds that they didn’t want to hire me and it made me feel better about myself to assume that everyone there is just a bunch of big jerks and I wouldn’t have liked it anyway. As a hint for you job seekers out there: when they fly you in for a three-hour technical interview, you really should bone up on your basics.

What made this a blog-worthy journey was the thought process I went through while I was still a potential candidate. After six years as a consultant, was I ready for employee-hood?

It seems like a no-brainer on the surface. As a consultant, I enjoy considerable freedom, especially with my free time which, as I age, becomes more and more important to me. Prior to my current contract, I hadn’t worked full-time in a year and a half. Mind you, that implies I’m working full-time on my current ones but between new babies, sick older children, spousal holidays, and Xmas, that’s not accurate either. But again, the fact that I have that freedom is why I love consulting. 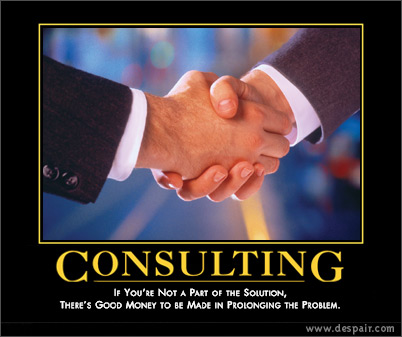 And because all my contracts are remote these days, I’m usually even flexible with when I work. This depends on the contract but for many of them, as long as I’m available for meetings, the rest of the work can be done whenever I want. Furthermore, I can take time off for conferences or vacation almost whenever I want. I say almost to account for times when the client really needs me but alas, I haven’t been quite that indispensable yet.

“So,” sez you, “why give up all that and more to become an employee working 9-5 on a lower salary with 2 weeks vacation?”

There’s a certain fallacy to consulting that we don’t like to talk about. It’s the Hear No Evil syndrome. If we don’t talk about it, it won’t happen to us. It’s related to the “I decide when I want to take a contract” argument. In my experience, this argument is true only about half the time. Because the fact is, when a contract ends, there’s often some level of panic involved. No matter how much money you have squirrelled away to allow for this eventuality, there is always a sense of “what if I can’t find a contract when I’m ready?” Depending on how much panic you feel, you might just end up taking a contract you don’t like. This is especially true these days when the money isn’t flowing like water so much as it is oozing like pus.

Naysayers will argue that employee-ship is no more secure than consultancy. Those people are liars and, very likely, smelly. Employees can be let go, yes, but in my experience, they aren’t the first to go. At my last contract, when the hammer fell, the contractors felt the brunt, not the employees. (Well, at least not directly. The rumour mill suggests that there is a “let’s see how many quit after we introduce THIS policy” program going on there these days.) The contract before that, there was also a mass layoff. I believe a few employees were included in that but again, the rumour mill claims it was pruning talent just as much as cost.

The upshot of this is that in most cases, contractors will get booted before employees. Maybe it’s just a brief respite since laying off all your contractors is rarely a sign of growth but it’s a respite nonetheless. Anecdotal evidence aside, contracts are generally shorter than employee terms and in the end, it’s just plain stressful looking for them. Especially ones that allow you to work remotely 100% of the time. So the prospect of being relatively secure (judging from the effort put into hiring process, the company was one that put a lot of value in its talent) in a position that promised interesting work and still allowed me to work remotely did hold some appeal. Maybe it’s a false sense of security but there’s a reason we still don’t know how placebos work. Perception is a powerful thing.

That said, I’d by lying if I said I didn’t feel a sense of relief when they said they weren’t interested. As much as I freak out when work isn’t handed to me, I’ve been eerily lucky in my consulting career. Even when lengthy involuntary breaks do come (the longest to-date being four months), it ends up leading to more interesting work in the long run because of what I work on and blog about in the interim. As a case in point, one of the contracts I’ve grabbed now is a direct result of my involvement with Sharp Architecture, which, in turn, followed from my delving into MVC two years ago when I was “between contracts”.

I’ve been careful not to explicitly say “being a consultant is better” because I’m almost positive the roundabout way I’ve arrived at the current point in my career is atypical. But here I am and all I can say is that after going through the reflective exercise, I have to conclude that luck was once again on my side when the employee-ship opportunity passed me by. Maybe I’m on borrowed time because I do know a couple of excellent consultants who are actively searching for work (ping me if interested) and in markets that have traditionally been very lucrative, both with the type of work and in the compensation. But until then, it’s time to stop yakking and get back to billable work.