Herein lies my account of our encounter with Hurricane Irene. It’s late coming for reasons I’m too lazy to get into (which, now that I think about, is the reason it’s late).

First order of business is to dispel some myths. We live near Nassau which did not get hurricane force winds. They reached 60 – 70 mph sustained with higher gusts. Even still, I’ve heard reports that there were 180mph winds going on, even in the eye, which sounds like journalism by way of the Chinese Whispers game. Closer to the eye, the winds hit about 120mph sustained while Irene was passing by us. That’s still plenty fast enough to cause major destruction but it still pays to get the facts straight.

As natural disasters go, hurricanes are fairly sporting. They give you plenty of notice before they bring down the fist of pain. Similarly, there’s a reason you don’t see a lot of coverage about hurricanes in the Bahamas on CNN. As a general rule, most Bahamians don’t pick that time to start seeking out their fifteen minutes of fame by going all Chicken Little when someone sticks a microphone in their face and asks them “what do you think of the oncoming hurricane?” They just do what needs to be done, ride it out, clean up, then go back about their business. No mandatory evacuations, no public emergencies, no national guards, and certainly no sense of “why is this happening to us?” But enough thinly-veiled social commentary. 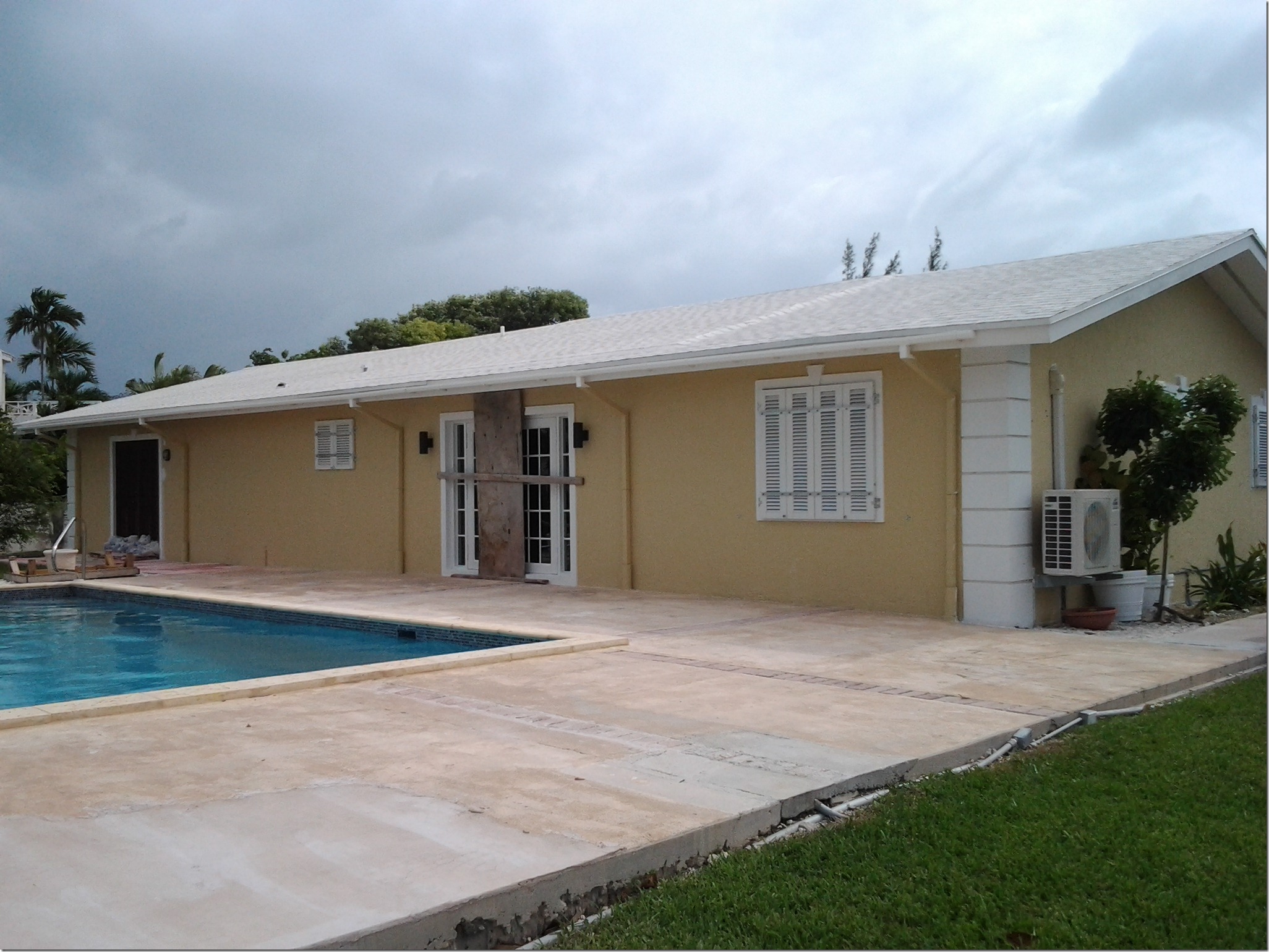 aring. We just got hurricane shutters in July and they are easy to set up. The majority of the time is simply making sure everything that could blow away is either secured or moved indoors somewhere. Not particularly hard or back-breaking work but it does take time and start wearing you down.

(The boarded up door in the picture is mostly precautionary. The door is too big for the same style hurricane shutters. The glass is impact-resistant but we had the plywood so we threw it up anyway.)

As for the storm itself, it wasn’t as exciting as one might think. We hunkered down in Syd’s room on Wednesday night and the power quit around 2am. Our generator wasn’t set up yet (just got installed a couple of weeks ago) so we lived like the pioneers did, assuming our forefathers had concrete walls, hurricane shutters, and gas water heaters and stoves. And Monopoly.

The shutters worked as advertised. So much so that we were able to open the windows they were protecting to get a much needed breeze.

By mid-afternoon, winds had died down a little and we ventured out to assess damage. Some trees knocked over and about 8 or 10 shingles missing (well, not technically missing; we later discovered them in the pool). Jake and Syd played superhero in the wind for a little while and we went back inside. Played some board games and built a fort out of sofa cushions and did other lo-fi activities.

In the evening we invited friends over and we barbecued some wings and cooked perogies. We have a small courtyard out front that’s protected on all sides and we ate out there, although still under the roof since it was still fairly blowy and rainy.

Later in the evening, tempers started flaring a little since we had to go to sleep and it was fairly hot out. Then lo! the electricity came on! We all praised Zeus, the god of lightning and, by association, electricity, flipped on the AC, and went to bed.

All in all, it ranks as a pretty entertaining camping trip.

Final thought: Be careful when you use the phrase “come hell or high water.” Mother Nature will test you.